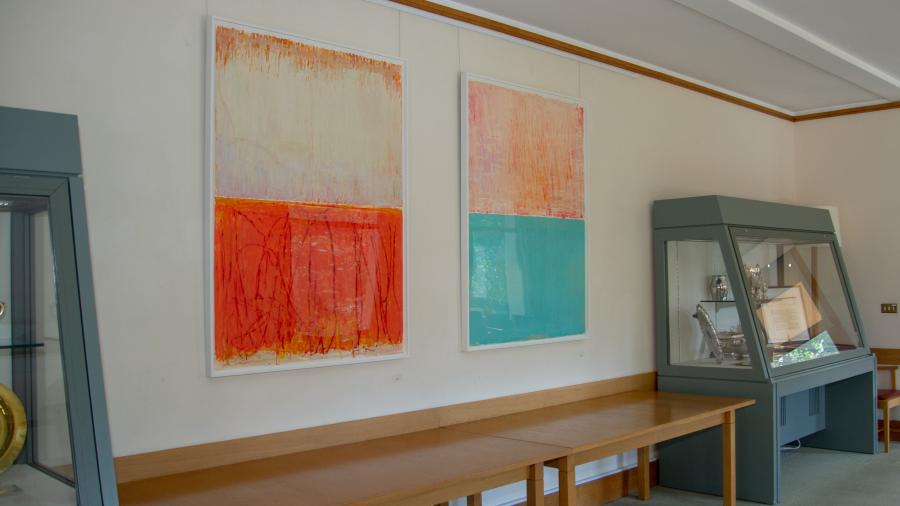 It was a full house at Wolfson for Saturday’s opening of a major exhibition of new works by the President of the Royal Academy, Christopher Le Brun. The exhibition was curated by Dr Anna M. Dempster, Head of Academic Programs at the Royal Academy and Wolfson College Research Associate.

More than 100 people, including some luminaries from the art world, were present to get a first look at ‘Dualities’, a collection of oil-on-paper works now hanging in the Wolfson until 26 August.

In the sun-filled Combination Room, surrounded by 10 of the 15 works on display in the College, the President, Professor Jane Clarke, welcomed the guests and warmly thanked the artist for his generous loan of such an interesting group of paintings. “This is surely the most prestigious of the series of exhibitions mounted by the Fine Arts Committee at Wolfson,” she said. “It is truly an honour to be showing the work of the current President of the Royal Academy, particularly in 250th Anniversary year of the RA”.

Professor Clarke met with the artist as the work was being hung earlier this week. “He described to me the process of exploration and discovery that he undergoes when painting. As a scientist I could relate to this, and I was struck by the parallels expressed during the recent Lee Lecture by Professor Dame Carol Robinson. She too described her work as an exploration.”

In both cases the audience was taken on an expedition into unfamiliar territory, yet another duality in addition to those explored by Christopher Le Brun in the paintings. Professor Clarke asked, “What better place than Wolfson College to set up this dialogue — a mature academic environment where science speaks to art and vice versa?”

The President ended by thanking the Fine Arts Committee for organising the exhibition, and especially Dr Anna M. Dempster for curating it and for writing the splendid catalogue that explores the theme of Doubles (Ridinghouse, London, £10 in the exhibition).

The making of ‘Dualities’

Anna Dempster then spoke of her pleasure and delight in working with Christopher Le Brun and thanked him for his extraordinary generosity in lending these paintings. She described visiting his studio and seeing them for the first time and being blown away by the vibrancy of the ‘doubles’ and how they had grown out of his recent series Composer(2017). She drew attention to the ways in which Le Brun explores juxtapositions such as ying/yang, cover and uncover, ‘reveal’ and ‘hide’, and that he responds to forms in music and in classical art and literature in particular. She thanked those who had helped to realise the exhibition, especially Nicola Togneri, Le Brun’s studio manager.

Christopher Le Brun responded, stating that “I am pleased to be in a Cambridge College.” He related his early ‘fork in the road’ that had taken him in the direction of making art rather than literature and thus away from Cambridge. He described the paintings explaining that their origin was as rejected woodcut prints. When he returned to them, he found that the paper was saturated with oil from the ink, and he began to paint over them. As the quantity grew, he began to put them in pairs, or doubles, at random. The result is a collection of works, each of which consists of two halves, two separate pieces of paper brought together.

Le Brun spoke of his interests and mentioned that Anna Dempster had drawn his attention to pairs in mathematics. “She left a 40-page essay on my desk to read — which I tried to do but found it impenetrable!” This reinforced the fact that making these works was an exploration for the artist, and he did not have definitive answers.

‘Dualities’ enhanced by a musical trio

The second part of the afternoon was a musical response to the exhibition by the Mifune Tsuji Trio, which consists of Mifue Tsuji (violin), Paul Jackson (piano) and Jin Theriault (saxophone). The trio played a short programme that included Stravinsky’s Danse du Diable and Piazzola’s Quintet, arranged for by Theriault for the Trio. Between these two pieces they played improvisationally in response to three of the paintings.

To quote Dr Owen Edwards, Chair of the Fine Arts Committee., “Altogether the combination of art and art-inspired music made it a unique occasion, and the audience appeared uplifted by the event.”