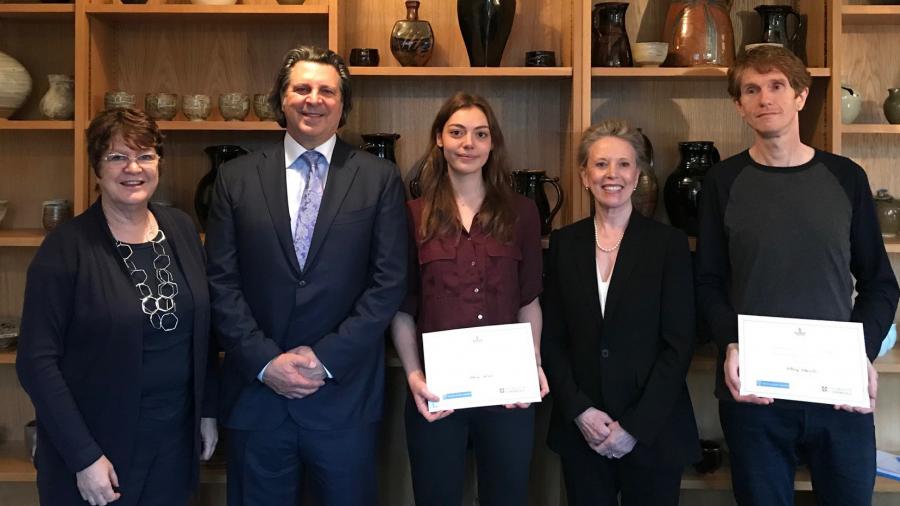 The Burke's Peerage Grants, generously funded by Mr and Mrs Nacol, were awarded in the academic year 2017-18 to Anthony Howarth, a PhD student in Social Anthropology, and Holly Lomax, an MSt student in Building History.

On Monday 23 October, William Bortrick and Mark Ayre, Chairman and Vice Chairman of Burke’s Peerage Foundation, respectively, visited Wolfson College, along with two Honorary Trustees of the Foundation, Mr Stephen H. Nacol and Mrs Rebecca H. Nacol, to present this year’s Burke’s Peerage Foundation grants. The grants are available to both undergraduate and postgraduate students working on areas relating to genealogy and personal heritage in the broadest sense.

Anthony’s ethnographic research focuses on the topic of Irish Traveller memory, with particular attention paid to what are called ‘stopping places’: roadside encampments in which Anthony’s interlocutors and their forebears once lived. His PhD aims to throw light on and, as such, give recognition to a hidden part of British history, as well as to ameliorate the plight of this ethnic minority. When Anthony heard that he had been awarded a grant, he was overjoyed: ‘Without undue hyperbole, the grant means that my daughter and I will be able to keep a roof over our heads until I complete the writing-up component of my thesis’.

Holly’s research aims to shed light on the decline of the aristocratic ancestral home in England from 1872 to 1973 by combining a systematic country-wide survey of what became of these houses with an in-depth analysis of two sample counties. Importantly, this research reveals geographical patterns and variations in the modes of loss and survival of the ancestral houses of the peerage, which have not yet been fully investigated, thereby enabling a more nuanced understanding of the social, political and economic factors that decided the fate of the aristocratic ancestral home. Holly described how she was delighted to have been awarded this grant: ‘as well as enabling me to dedicate my time and energy fully to my research, it has bolstered my confidence in the project and given me added motivation to ensure that it will be a valuable contribution to the study of social and architectural history.’