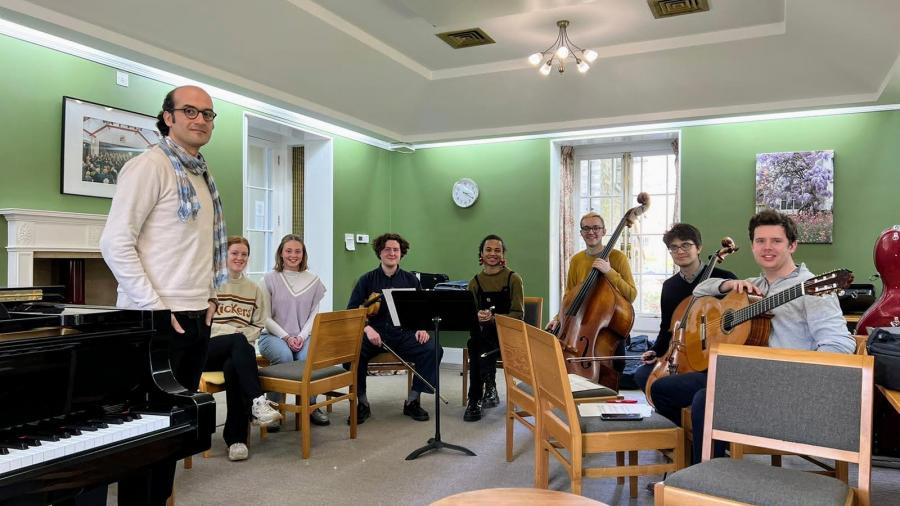 Join us on Sat 14 May (13:30-14:30) for the inaugural performance of the Cambridge University Experimental Music Ensemble (CueMe).

Cambridge University Experimental Music Ensemble (CueMe) was founded by composer, researcher, and improviser Saman Samadi, in 2021, with the support of Peter McMurray of the Faculty of Music, and Lynette Alcántara of Wolfson College, with the aim of undertaking performances through a fresh approach to the classics of the repertoire. CueMe aspires to deliver renditions different from the mainstream of the experimental music scene, and through experimentation, as a new mode of interpretation, on works of the past that were not meant to be 'experimental'. The ensemble is also enthusiastic to perform works by both emerging and established living composers.

Saman Samadi creates a series of music events with CueMe, with the purpose of operating an experimental space for exhibiting past musical and literary compositions as well as scholarly articles, through experimentation — by a critical reflection on selected works and discovering new potentials and common threads between them, in order to deconstruct, examine, and problematize existing musical notions and performative approaches through new modes of interpretation and communication, and through creative assemblages of them in performance.

This series will be mutational performances based on Boulez’s Notations, poems by Mallarmé, and scholarly texts by Boulez and Foucault.

"Growth is never by mere chance; it is the result of forces working together." James Cash Penney

This event is part of the Wolfson Explores GROWTH 2022 series.

Lethal or life-giving? Wolfson's exciting contemporary art exhibition explores the potential of animals, plants, and substances from the natural world to ‘Kill’ and/or ‘Cure’ (open to the public Saturday and Sundays, 10am - 5pm).